The 2017–18 season was something of a transition year for the Atlanta Hawks. Mike Budenholzer was the coach of that 24-win team. Dennis Schroder, Taurean Prince, and Kent Bazemore led the scoring charge for the Hawks. Not sure if I’ve ever been more jealous of a season ticket holder—imagine how cheap they must have been! But something of importance did actually take place during this season: The Hawks drafted John Collins, a power forward or small-ball center who is a good finisher down low but lacks post moves, and can hit the deep ball surprisingly well. Collins was also a rather decent rim-protector as a rookie averaging 1.1 blocks per game.

If we think of the 17–18 season as the prologue, the 2018–19 season can be regarded as Chapter One. While drafting Collins was the first piece, the main piece was drafted fifth overall; Trae Young. Young was drafted by the Mavs but was traded to the Hawks and along with an additional first-round pick for Luka Doncic. I refuse to get into the “who won the trade” debate, because I am here for positive vibes only (and because Atlanta fans could be reading this). I also won’t be talking about the other guy who the Hawks traded away in that same draft. So let’s talk about what they did do. In addition to Young they drafted Kevin Huerter with the 19th pick. Huerter has proven to be a knockdown shooter, shooting 38% from deep on about five attempts per game. He also has a decent handle and gives really good effort on defense. (If you aren’t familiar with Huerter’s game, you can check out some highlights here.) They also drafted and then later traded Omari Spellman with the 30th pick, a small-ball center who can shoot. It’s a solid idea for a late-first rounder, but since being drafted, he’s yet to make much of an impact and is already on his third team.

The 18–19 season was a good first step for the Hawks franchise. With a rookie head coach in Lloyd Pierce and three key players in their first two years, growing pains were bound to happen. But the Hawks still finished with five more wins than the previous year. John Collins proved to be a real player, almost averaging a double-double at 19.5 points per game and 9.8 rebounds per game. But the real stat to look at from 18–19 is Collins’ three-point shooting: Collins shot 35 percent from deep on nearly three attempts per game. A big man who is a lob threat and can also space the floor is a good asset to have long term. Kevin Huerter had some amazing defensive plays along with some poster dunks. Huerter provides good spacing with some good perimeter defense. More than most casual Hawks fans would have anticipated. Trae Young got off to a bit of a slow start, but proved by year’s end he could score and pass at a high level, finishing his rookie campaign with per-game numbers of 19.1 points and 8.1 assists during. Both Kevin Huerter and Trae Young made the All-Rookie teams.

Chapter Two is where things started to take shape. Heading into 2019, the Hawks again had two first-round picks, this time both in the top 10. They used one of them (fourth overall) to select De’Andre Hunter, an NCAA champion who was named Defensive Player of the Year by the National Association of Basketball Coaches (NABC) while at Virginia University. While he’s largely been the stout defender he projected as, Hunter has also shown some ability on offense as a complementary option . Hunter fits into a mold of a three-and-D player who can do a bit more on occasion. For example, maybe coast to coast on a defensive rebound. Shooting 36 percent on close to five attempts per game is exactly what you want to see from Hunter.

With the 10th pick of the 2019 Draft, the Hawks selected Cam Reddish. Once lost in the mix at Duke alongside Zion and RJ, Reddish had much more space to operate alongside Young and Huerter. Reddish didn’t come out the gates guns blazing, but when he started figuring things out, boy was it fun to watch. 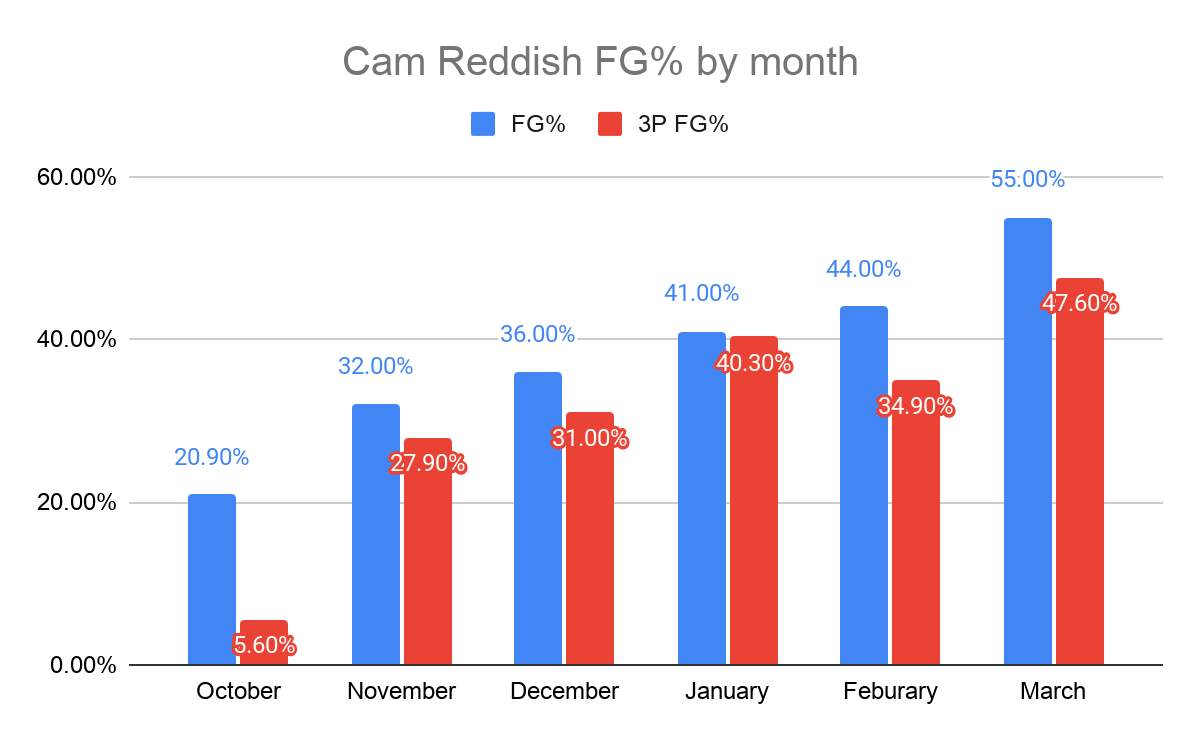 Kevin Durant, if you’re reading this, I’m so sorry to disappoint you with this graph. It felt like a good medium to show how well Cam is developing. Some people are visual learners, Kevin; this is for those people. Like Hunter, Reddish has displayed some defensive prowess himself, averaging a steal a game. There are some great defensive clips in that link above if you don’t believe me about Reddish being a good defender (or if you’re like Kevin and aren’t a numbers person).

Chapter Two didn’t end quite the way the Hawks thought it would.  A lot of that had to do with John Collins getting suspended just five games into his season. Losing a key player so early in the season really put the Hawks behind the eight ball, as they went 4–21 during Collins’ suspension. We don’t know whether or not last season’s Hawks would have surpassed their win total from 18–19 as their season ended early due to COVID-19, but it seems unlikely; they’d have needed to win 10 of their last 15. Oh, forgot to mention that the Hawks traded for Clint Capela, a big man who played on the Houston Rockets before the Rockets decided to lower all the door heights in the stadium so that no one over 6-foot-8 could fit through (I assume that’s what happened). So they just made things easier and traded all their tall guys. That’s a thing that happened, but I almost didn’t remember because he technically never played a single second in a Hawks jersey due to injury.

Chapter Three will start within a few days of this writing. The 2020 Draft is happening on Wednesday, November 18th, and because of that weak record I just mentioned, the Hawks have another pick in the top 10 (this time at number 6). There are so many directions Atlanta can go in the next few weeks. They could keep the pick and land some of the top talent that the class of 2020 has to offer (it’s 2020 after all, what are we really expecting?) or they can trade the pick to another team and get a nice package in return. It’s been reported that the Celtics and Pelicans have inquired about the sixth pick.

The Hawks also have a boatload of dead money coming off the books. Chandler Parsons’ $25 million is gone, Jeff Teague’s $19 million is gone, and a few minor contracts like Vince Carter’s and Nene’s are gone. Simply put: the Hawks had a payroll of $112 million in 19–20. As of today, the Hawks’ payroll stands at about $69 million (nice!) for 20–21. That’s enough room to, say,  take a player back in a trade for the sixth pick? Maybe they could keep the pick, get a top-level talent in the draft and try to sign someone like Brandon Ingram in free agency?

You can speculate all day and make up a ton of different scenarios of what the Hawks could do. But we won’t know for sure what Chapter Three will look like until December 22nd, the start of the 2020–21 NBA season. With a current lineup of Young-Huerter-Reddish-Hunter-Collins, the Hawks’ starting five has all come from the draft. They can learn and grow together, which should make for some amazing chemistry in the long run. Capela’s fit is going to be interesting. seeing as he was injured and never actually suited up for the Hawks. If I had to guess (which I’m bad at— you wouldn’t believe how bad I suck at rock paper scissors), Huerter will come off the bench and Capela will start. With Trae Young poised to take a big leap, Hunter and Reddish looking to build off successful rookie seasons, Collins and Huerter eager to play, and Clint Capela excited to do…umm, Clint Capela-type things, the Hawks will be one of the more fun teams to watch, regardless of how this chapter unfolds.

(Sitw Owner’s Note: Follow James on Twitter! He is a new contributor and an excellent writer. Welcome to the team, James!)